What makes a bad interior photo?

In the era of the smartphones all of us seems to be capable of capturing nice photos of any house or interior. It is sure that can’t all of us be a photographer so we might not see the differences and important parts for the first sight. To know what makes a bad interior photo I do my best to tell you as much as possible about the bad and good photos, about their differences, about the perspective you should have to be able to judge an architecture photo if it is good or not.

Please read this article knowing that my recommendations are set to reach a higher standard. I would like to help you achieve much better results which you can do by keeping these steps but to understand the top-level interior photography we use some other techniques

There are some things that make the interior photos look professional but you will never notice with an untrained eye. One of them is the vertical rule. Everything that is vertical in the room should be vertical on the photo. You can achieve it by levelling the camera or your phone perfectly aligned horizontally. Make this test: Tilt your phone or camera downwards and upwards to see how the verticals (walls, doorways, cupboards, etc) are affected. People tend to shoot from up to downwards to show an interior space but this will make the verticals go off. Have a look on the photo here.

When you are photographing people or any object, the camera has to focus on them. Other parts of the image may be important but not as much to have perfect focus on it. Interior photography is an exception here. Everything has to be in focus. This is something which you can hardly achieve with a smartphone and you have to know some major settings to use on your camera as well to be able to have wider focus distance levels. (you have to set the aperture at around F9 and manually focus to the nearest third part of the frame. Not too close because the further things on the image will be out of focus then)

I gladly see that ultra-wide angle GoPro photos are not so much used any more. The action cams are made for videos. The wider a photo is the higher distortion it will have. Have a look on the photo here. The two photos have almost the same in frame but the difference is that the first is shot wide-angle but the second is not wide-angled (the camera was moved back with a meter almost). Can you see how the wider photo makes the table distorted? The shape of the table is totally different than in reality.

Some people think that a wide angle will make the place look spacier so they want to have nice wide photos to attract more client. In reality, I can tell you, these people will give you negative review if they feel themselves cheated by the photos. I always do my best to give the exact space feel on the photos as it is in reality.

It is easy – shoot all rooms without having yourself or the camera reflected in a mirror or a window or any shiny surface. It can look really silly and funny when the photo taker is included in the shot.

The biggest challenge in interior photography to avoid making a bad interior photo is to handle the dark interior with the bright exterior. Mostly on sunny days on the Canary Islands we have huge difference in lighting levels of the interiors and the exteriors. (we call it the dynamic range of a photo) To light up the interior it may seem to be a good idea to use an on-camera flash to lighten up the interior. It may be good up to a point but under professional lighting we always avoid any light source used from the same direction as the camera is. First of all it makes a typical “poor” lighting on the foreground of the image and the on-camera flash will not light up the bigger spaces so the far-end of the living room will be very dark compared to the foreground of the image.

As the interior is very dark during daytime compared to the exterior. If you are not a skilled interior photographer you will have to choose between one of these. Dark interior or blown-out windows? Cameras cannot handle such dynamic ranges. To have nicely exposed window view and bright interior on the same photo, you will have to make a choice.

I use special techniques to be able to have nice window view and interior as well. But if I should choose I would rather want nice bright interior with blown-out windows than dark interiors with view. As we are shooting interiors, it is better to show it nicely. People usually overestimate the window views. You can make a photo from the window showing the view. By this your clients will see and understand the view from the property.  A dark interior is really something that makes a bad interior photo so better to avoid it.

As I mentioned before, the perfectly horizontally aligned camera is a must to have nice verticals. But also it is important to have the proper height when shooting. Living rooms shall be shot at a height where all the furniture can be seen properly and the space is understood well. As we do not lean the camera down- or upwards we have to set the frame by levelling it. Kitchens are typical shots where bad height is used. I tend to say to shoot around 30 cm higher than the countertop. 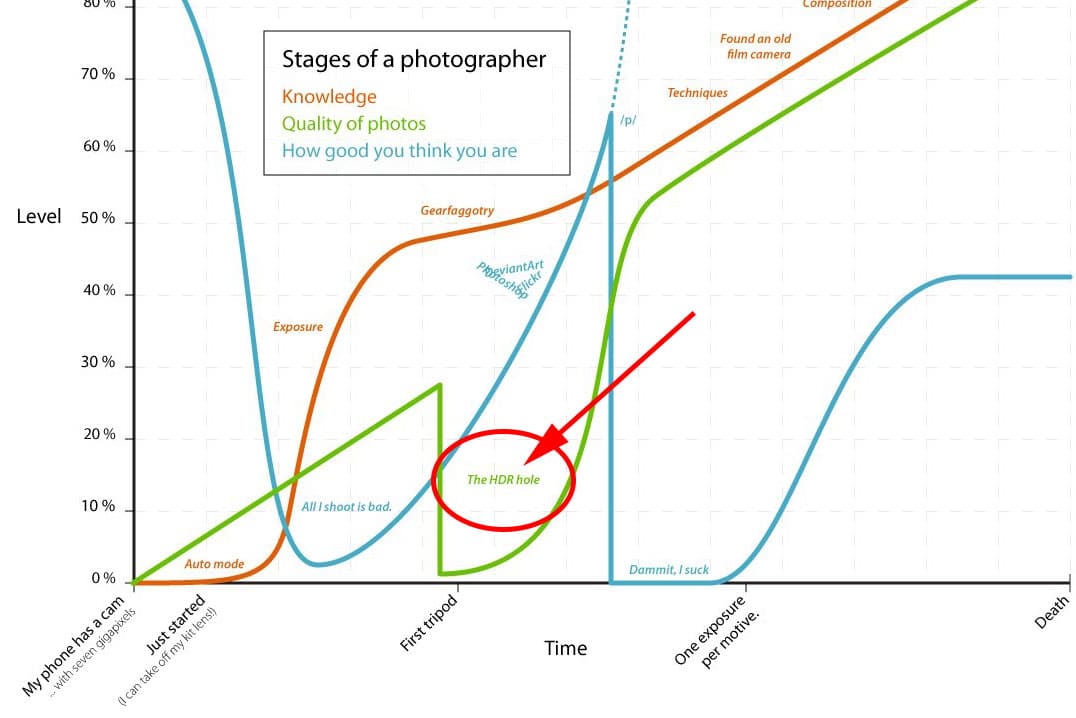 Hdr is a photo merging technique where more photos with different exposure are combined. Only uses the right exposure values of each image. For landscapes it is often used. But in my opinion it gives a very ugly, oversaturated outcome. The windows are always greyish and have a “halo” effect around them. Hdr makes really bad interior photos in my opinion and I would never recommend using Hdr softwares for quality interior photos.

There is a very good diagram showing the “Stages of a Photographer”. It has its “HDR hole” which tells a lot about the HDR by the photography point of view. Composition

Let’s jump in the middle. To easily understand, white balance issue means the colors of the lights those are present. We could also call it “color-correctness”. What does it mean? It means that anything on the photo was white in the real life, should be white on the photo as well. If the walls are white, they should appear white on the photos as well. The problem with it is that a camera can set its “white balance” to a given temperature. (we name the white balance in Kelvins, you can read more about the white balance in this article) But the interior photography is very difficult to handle the different temperature light sources. (different temperature means different colour)

Just to mention a normal sunny day which is quite normal here on Tenerife. The sun shines into the room, hitting the brown coloured marble, it will make a brownish color cast to everywhere it bounces. The floor and the whole interior will be soaked in blue light as it comes from the blue sky (you must have seen heavily blue-coloured floor photos). If you want to turn on the lights, the older lights will make yellow and the led bulbs will make white light. Not to mention if the room has red curtain on a window then the light coming through it will be red. So you can imagine how the white walls are lit up by different coloured light.

I have put this photo comparison here for you to have a rough idea of what are the differences finally. The before photo has the following problems:

I hope this article helped you to make good interior photos from now on. To see more example from my works you can visit my Gallery here.